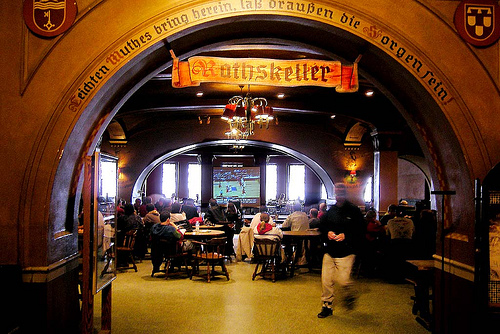 Der Rathskeller opened in 1928 in the Memorial Union, and only male students were allowed inside. In response, the Union Women Affairs Committee established a meeting place in the Paul Bunyan room in 1934, and called it “Der Catskeller”. Finally, in 1941, women were allowed to use Der Rathskeller, but only after 2:30 PM. (These days, they are welcome any time!)

At this juncture, an event called Danceskeller began to run every Friday and Saturday night, where male and female students paid 25 cents to swing dance the night away.

The word “Rathskeller” is German, and roughly translates to , which was widely known in Germany as a place where citizens would meet for fellowship and refreshments after a long day.

For more interesting facts about the UW, visit our Did You Know? page!